We caught up with the backyard boys, Deacon and Harley, a hunky, furry, usually-naked couple from Southern California. We talked about sex, relationships, stripping off at the beach and, erm... gardening.

meat: Do you guys own any clothes?

Deacon: We have two closets full of clothes we never wear. We have a lot of costumes, singlets, and an entire chest full of underwear. Can one really ever have too much underwear? We aren't naked all the time. Sometimes we have to go get groceries. Also, there are actually times here in Southern California when it's too chilly to be naked.

What's your favourite costume? Do you ever wear a costume to buy groceries?

I'm in love with a green Zentai suit I found at a thrift store. But I rarely find an opportunity to wear it. I try to blend in with the general public when buying groceries. You may have seen us on www.peopleofwalmart.com

Harley, that's quite some beard – what's your advice to guys when it comes to choosing beard length and size?

H: Go with what's comfortable for you. Whatever you do, wait past the itchy stage. It lasts for a short time. That's every guy's first complaint about growing a longer beard. It's all about preference though and what your genetics will allow you to grow. Take care of it. Wash it every other day with a Pine Tar Soap. Moisturise it daily with Jojoba Oil. You be you. Your facial hair style is all your own.

How did you guys meet each other?

When I walked into the parking lot, this handsome, beardy fella was getting out of his car. I was a little dumbstruck. I'm rarely at a loss for words and can talk to just about anyone. But for some reason, my words escaped me. We were introduced and I stammered.

The first thing I said to him was, "is that your car?" That was 8 years ago.

It looks like you guys have sex all the time?

D: Not all the time. Sometimes we do banal things like scrub the toilet or mow the yard. We do have a great sex life though. Both of us have pretty high libidos and are just plain sexual people. It's part of the great thing about being dudes and having dicks.

What are your top tips for having a long-term relationship that's so full of sex?

D: Communication. Finding ways to please each other. Spice it up. Learn what winds the other's clock. But ultimately it either works or it doesn't. So many people talk about relationships being hard and requiring work. If it really takes that much effort, it probably isn't the right relationship. It just comes naturally for us. We are best friends and in love. I can't imagine my life without the beardy one.

When we first met, he asked me to go camping with him and a group of guys. They already had a camp site. There was a lot of hiking during the day and drinking by the fire at night. We definitely made good use of the tent time. If that tent could talk.

H: We had a great time. Pretty much fucked the entire time in a 2 man tent. It was all Brokeback Mountain and shit.

Harley, tell us about the tattoo on your arm.

H: I have several tats each with there own significance. I have a love of Americana style tats and my man Deacon, so I combined the two into the merman tat on my chest. The tattoo on my arm is an homage to my father. The wings are a symbol of finding courage and maturity.

How did you start 'The Backyard Boys'?

D: We moved into an awesome house 7 years ago with a HUGE mostly empty, private backyard. We are both really into plants and gardening so we quickly set about making the space lush and semi-tropical with landscaping plants.

It was our pet project. Our baby. We wanted a space that looked like something out of Better Homes & Gardens meets Alice in Wonderland meets Mars Attacks. It's very eclectic.

Not really sure how/why "The Backyard Boys" happened. It just kinda did. We are both really sexual, both into nudism and nature. So we wanted to share that with other like minded pervs of the world.

Tell us about the beach where all these photos are from?

The beach we hiked to is called Blacks Beach. It's kind of difficult to get to, but that's part of the appeal since it's a nude beach. It keeps some of the "looky-loo" types from just walking out onto the beach. It's a beautiful strip of untouched, California coastline. Kinda rugged in certain areas but the beach itself is peaceful and a great way to spend a Sunday.

What do you like most about living by the beach?

Living near the beach is part of the appeal of California life in general. We are both really drawn to the water so if we ever had to relocate away from the ocean, it'd be really difficult. It would have to be near a lake or a river at least. But there is something to be said about the "beach vibe" atmosphere. It's really relaxed, laid-back and very casual. Being able to go everywhere in flip flops and not stand out is great. Plus, there are a lot of hot surfer dude types to look at.

How did it feel posting your first sex video online?

D: It was hot actually. It was initially just something we started doing for us. Filming ourselves then watching it and being turned on by it.

D: It's really our own creation. An expression of our sexual selves. We have a lot of fun with it and don't take it too seriously.

Harley, Have you ever gotten in trouble for being naked somewhere you shouldn't have?

H: No, but I have almost gotten caught. I hooked up with this guy once and we went to this abandoned bridge to get it on. We couldn't go back to each other's places. We had just finished and up rolled the police and asked us to leave. It was an extremely close call.

What do you think makes a guy hot?

D: Confidence but also being down to earth and approachable. A good sense of humour. Beautiful eyes. A nice ass. Maturity. A great vocabulary.

And finally what's your favourite plant?

H: I would say my favourite types of plants are Begonias. There is so much variety within the species in shape and size. The flowers they display are delicate and exotic. 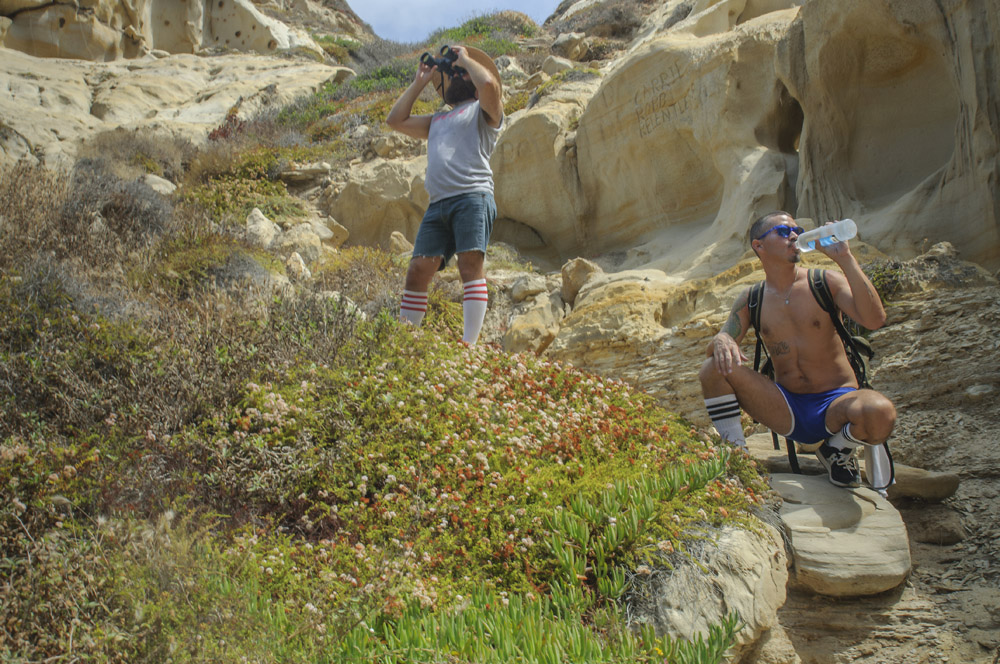 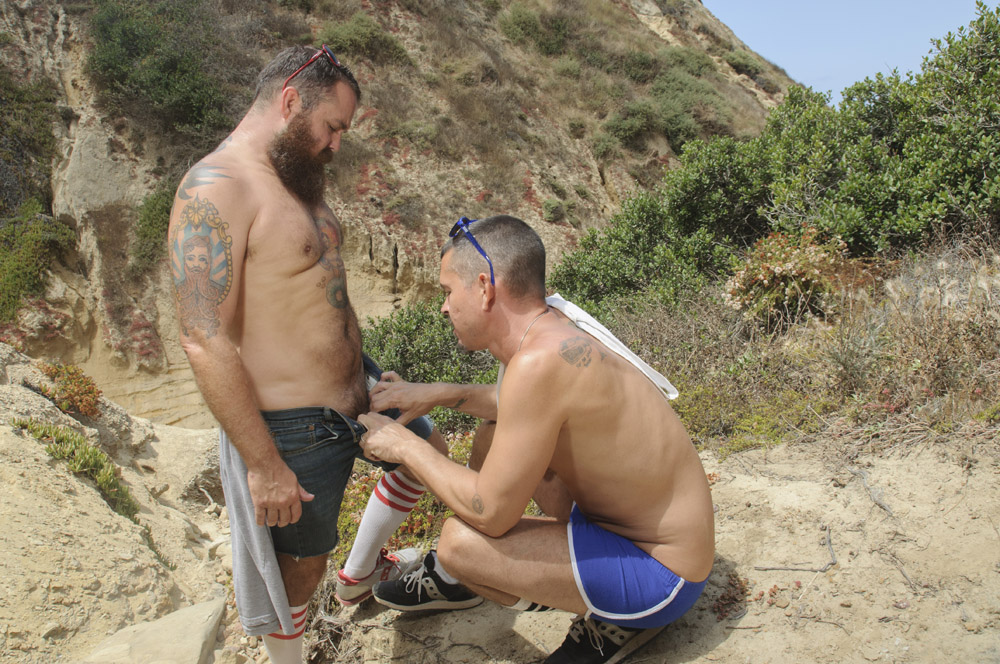 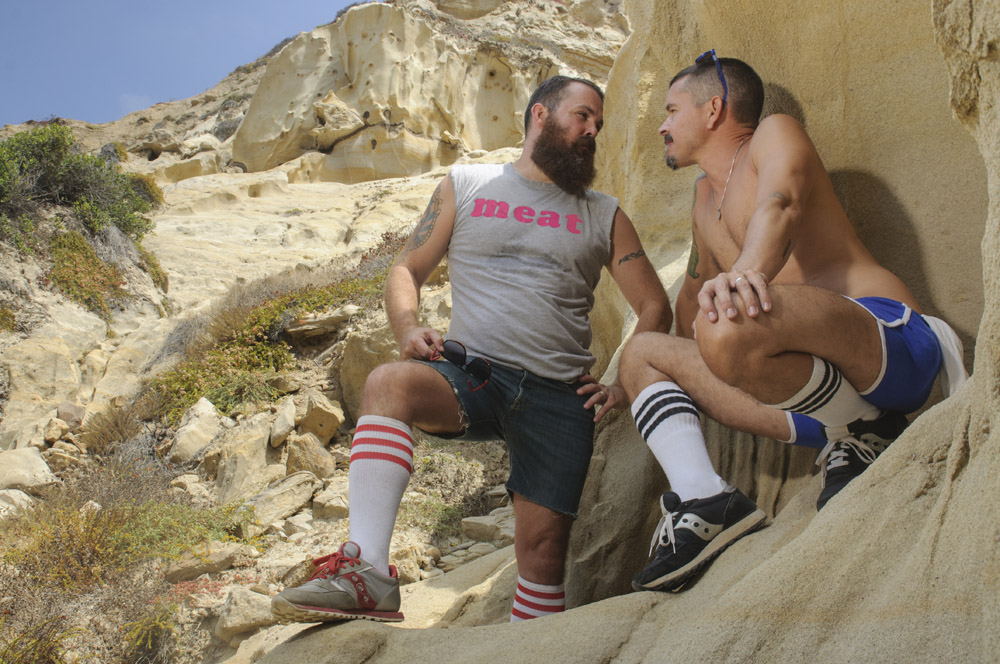 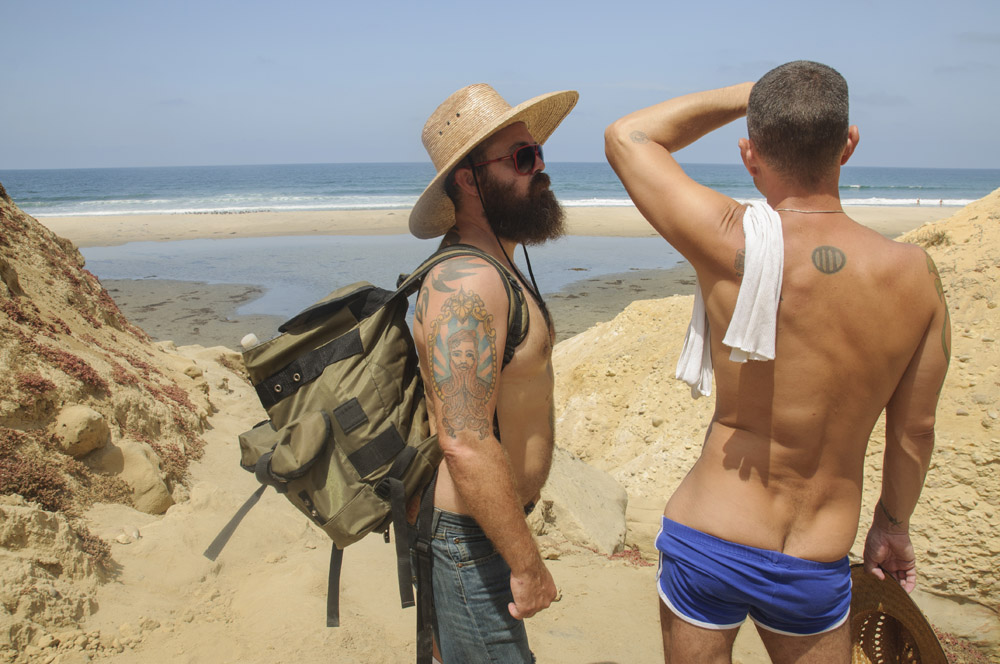 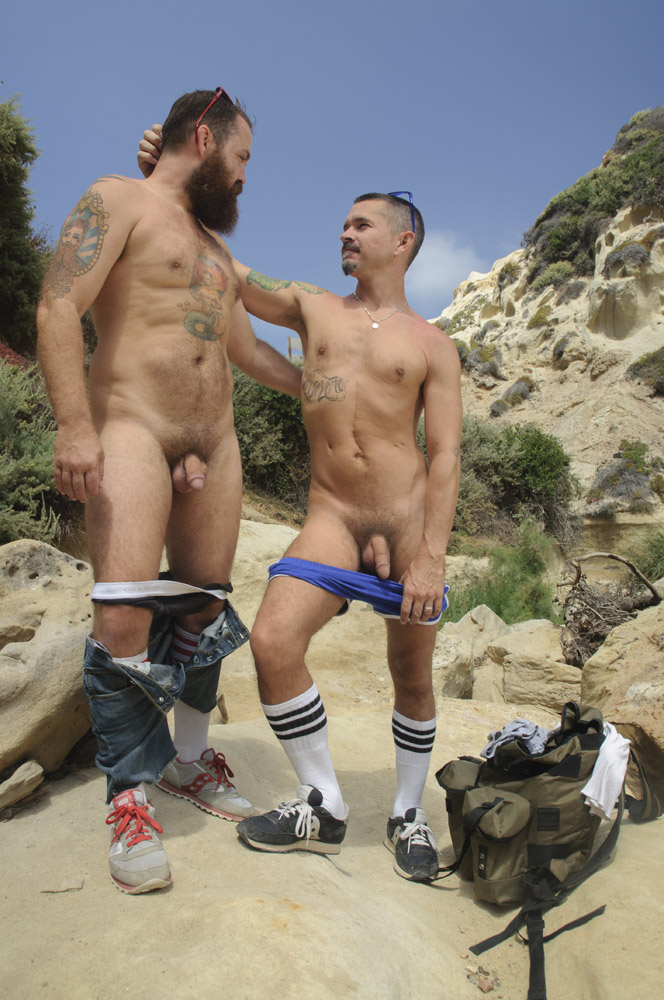 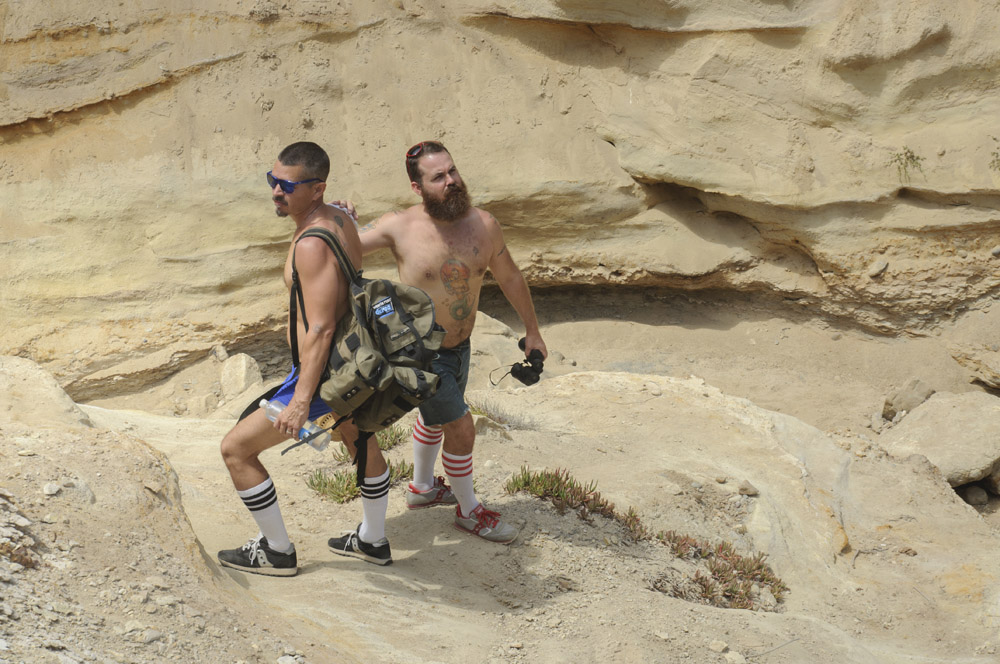 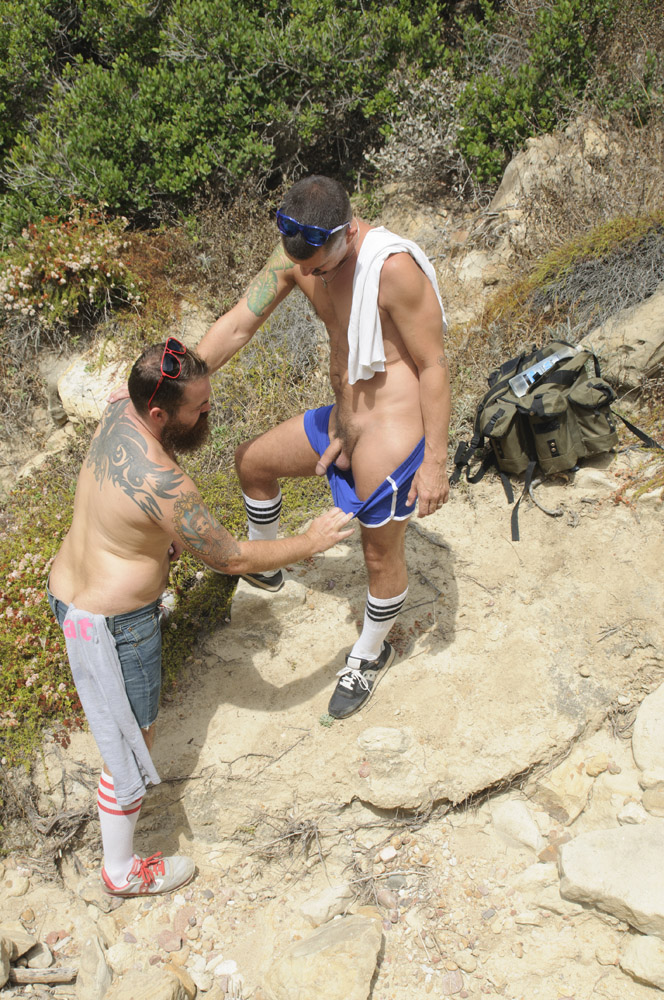 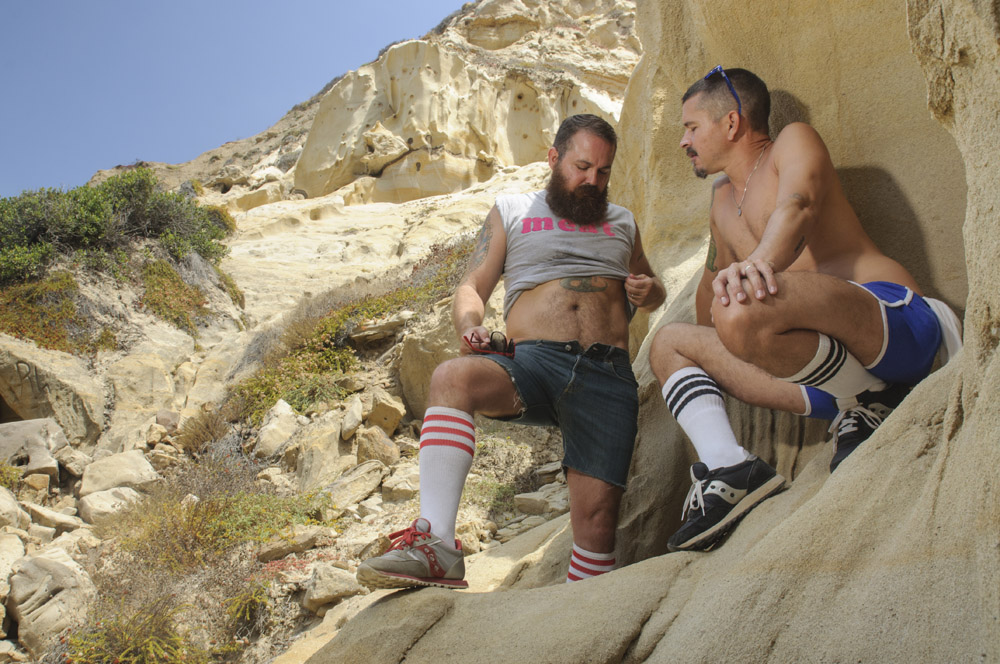 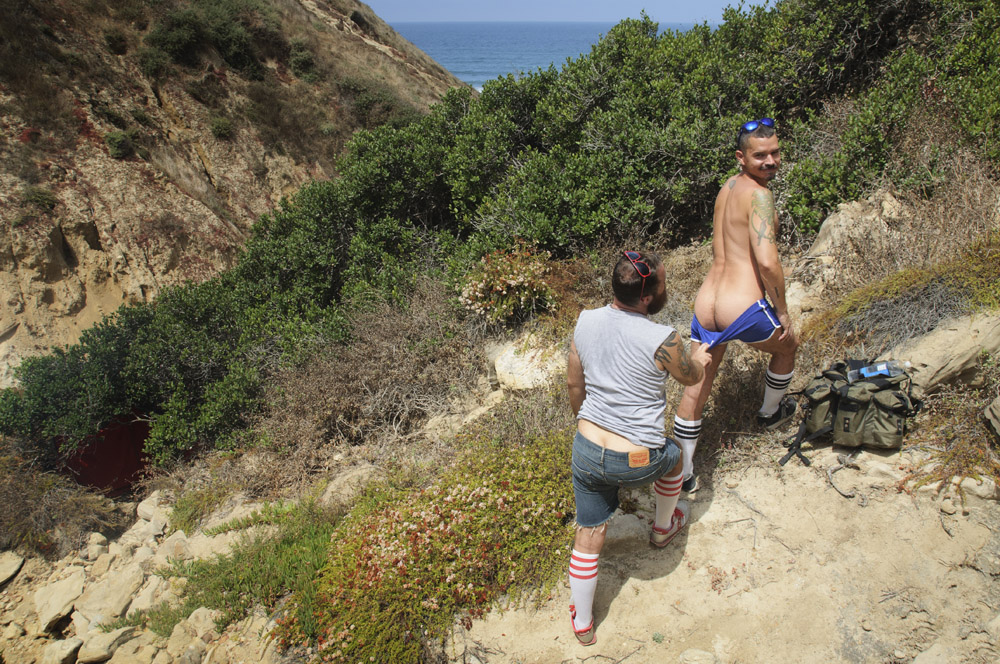 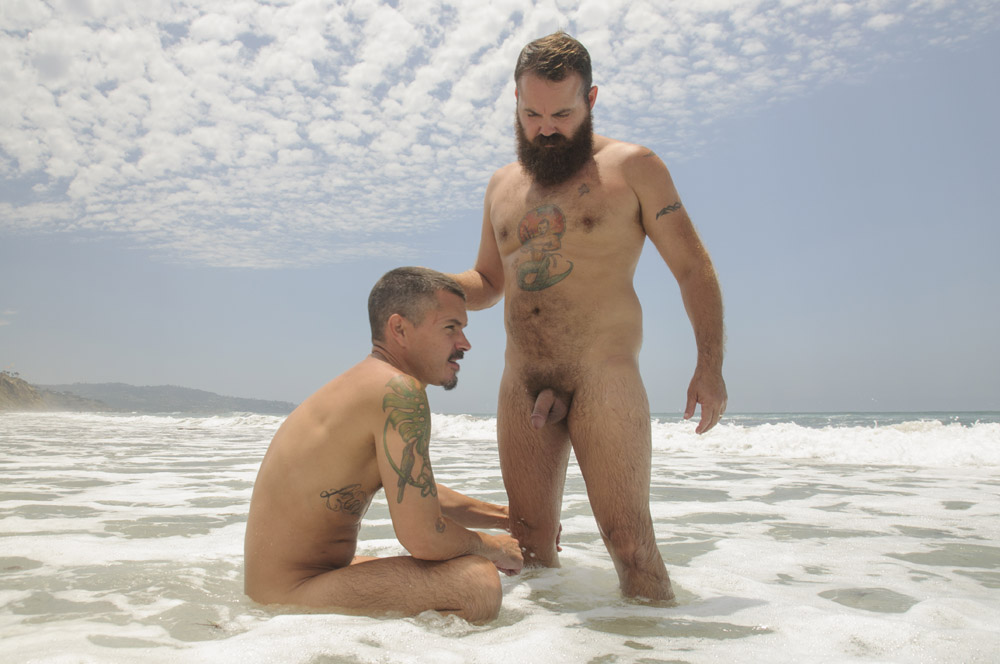 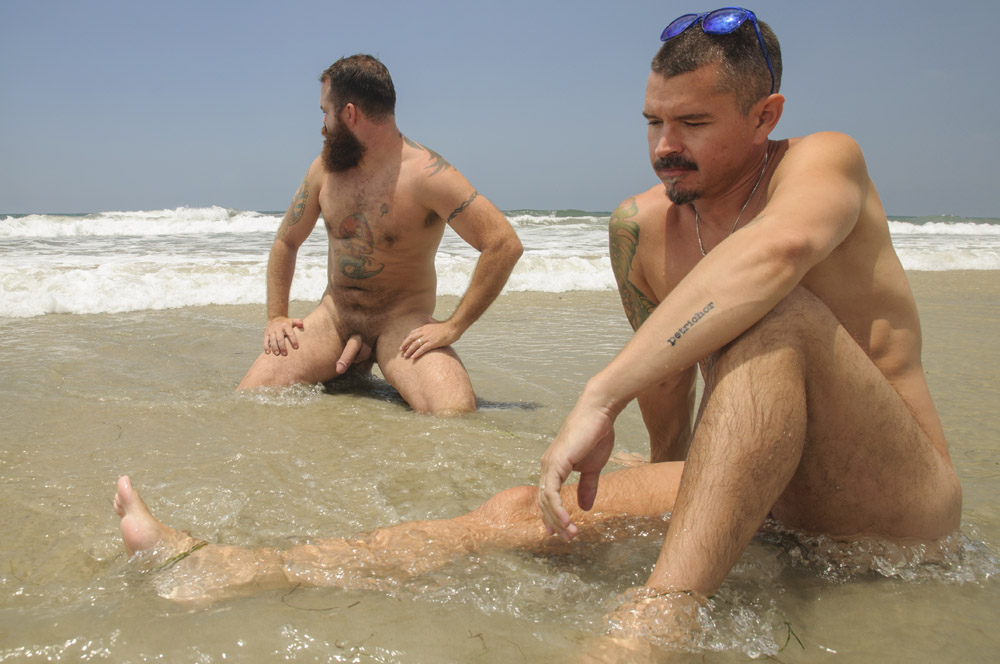 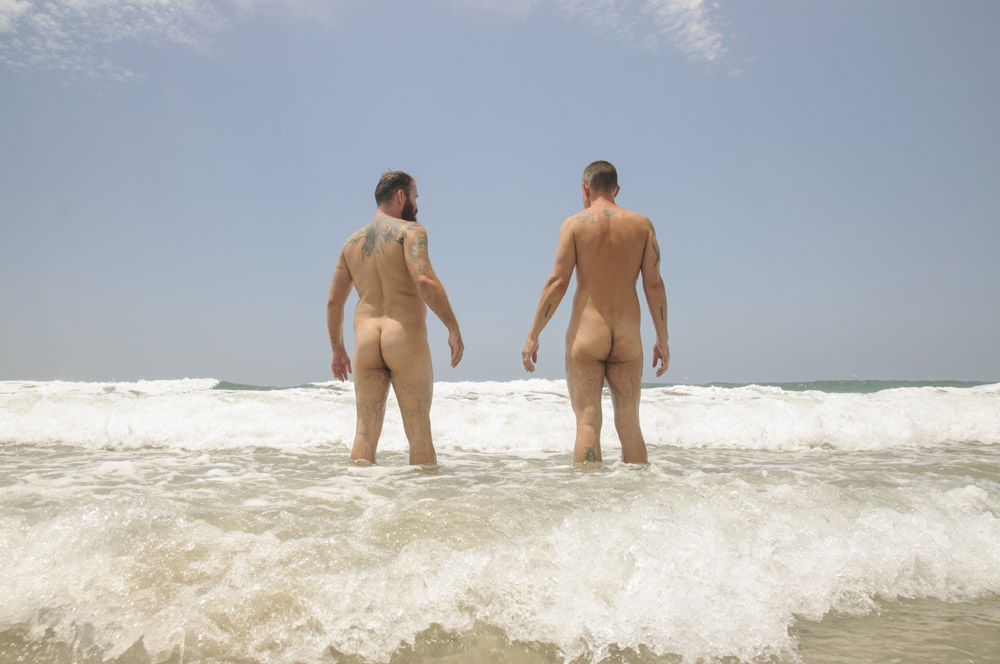 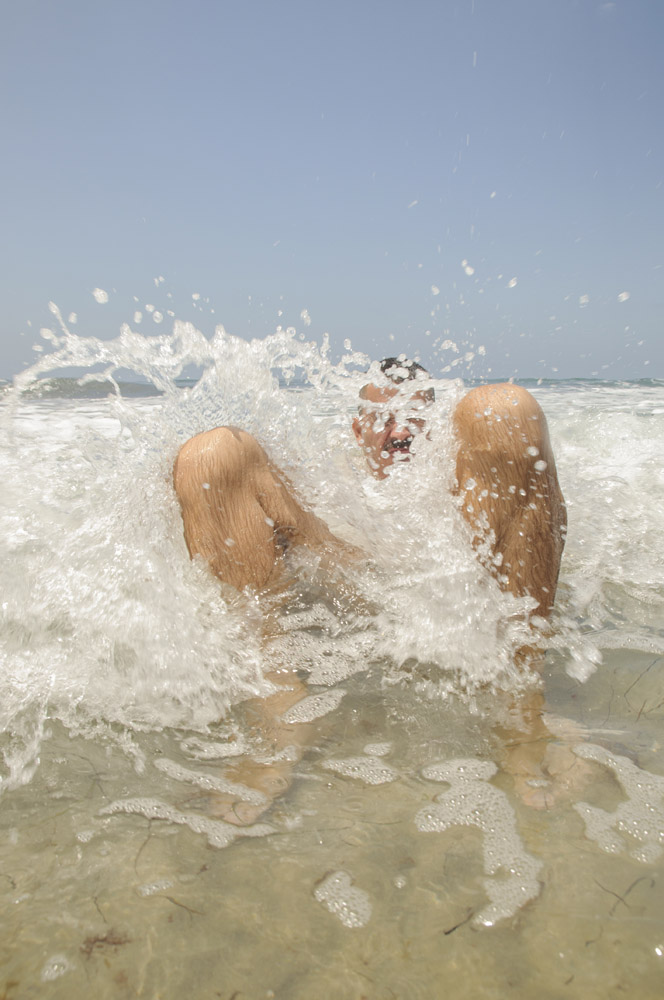 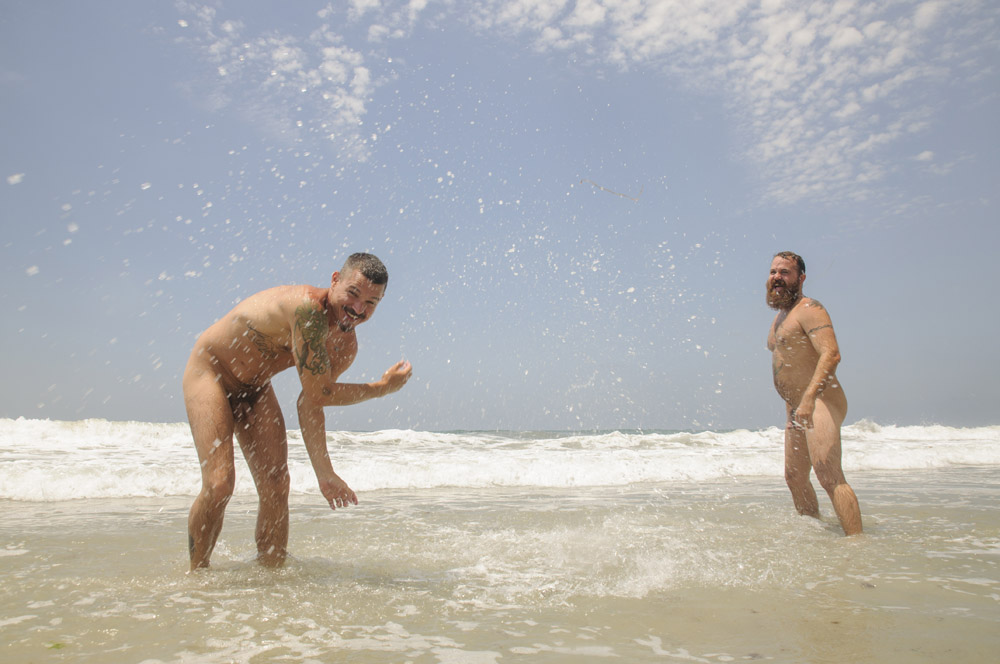 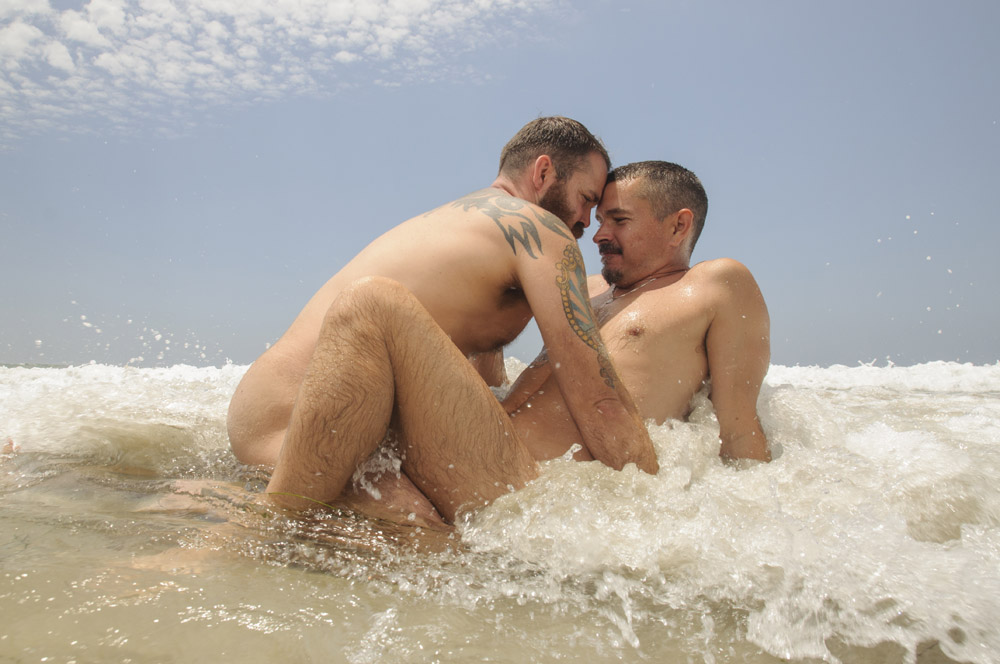 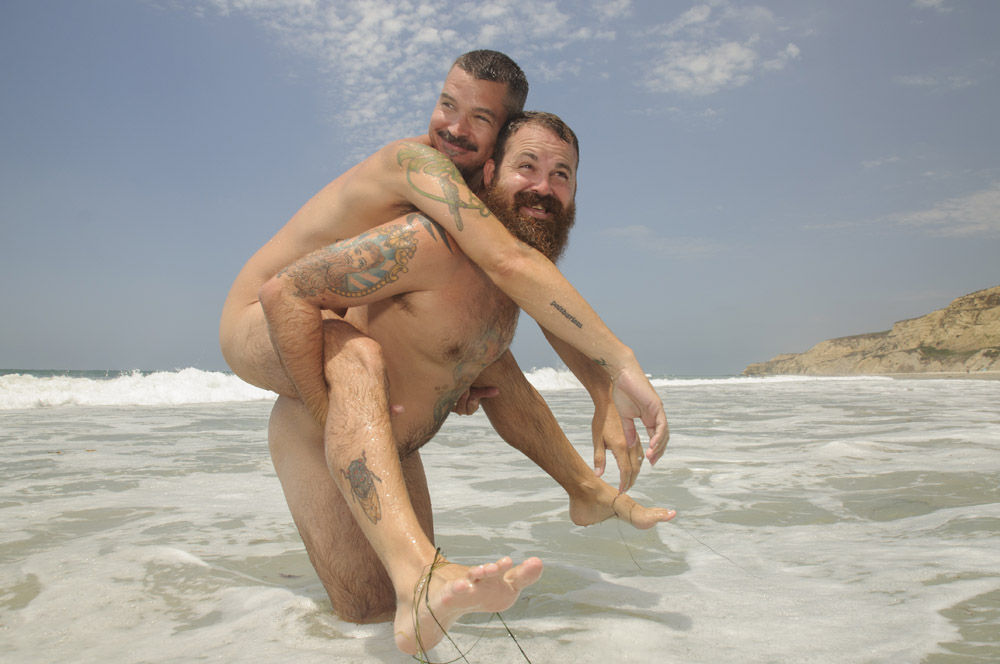 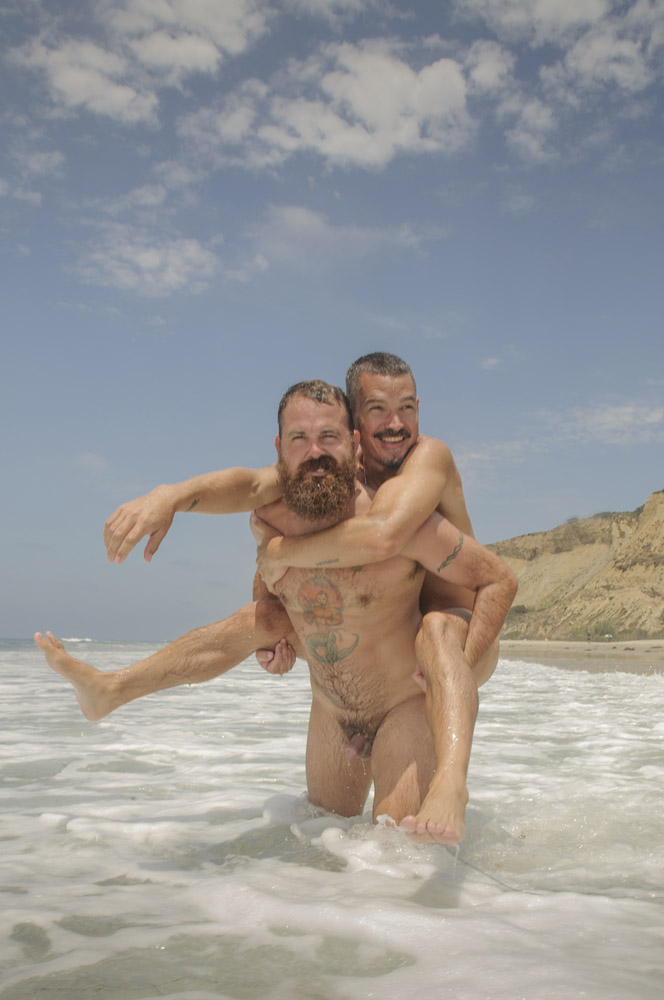 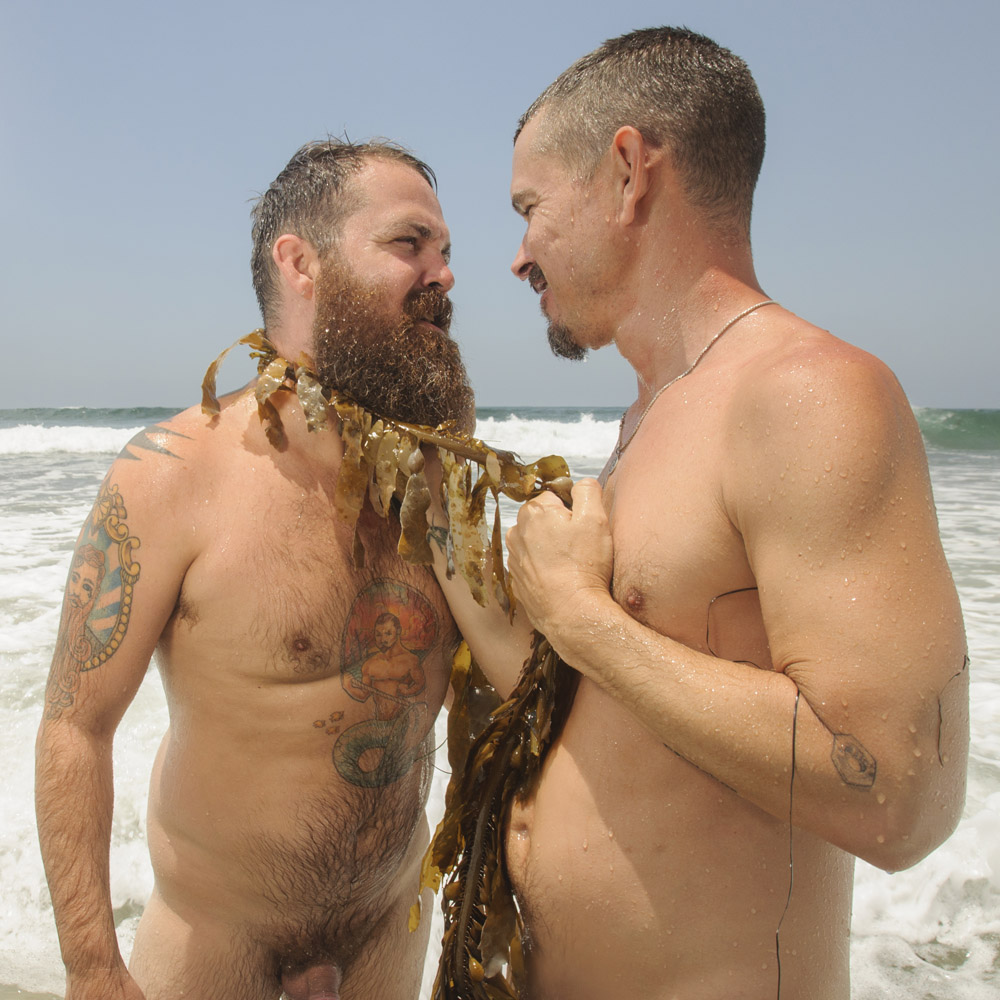 You can check out the backyard boys' super-sexy tumblr here: http://thebackyardboys.tumblr.com/